We found a barbera microcosmos in Menfi, Sicily

Not all things are what they seems to be, barbera is a grape but also the name of a winery in Menfi, Sicilia: Cantine Barbera and its wine maker Marilena Barbera.

Marilena is a passionate winemaker, in her own words she is perhaps more of an interpreter of the vineyard and the grapes, mentoring it on its way to become a wine. She became our wine and spirit guide through the microcosmos of perricone.

Cantine Barbera does wine that reflect the wine the vine and the grape wants to become, they do also in some way reflect the wine maker, but the aim is harmony. The philosopy behind Cantine Barbera is be natural, to let the grapes take in the terrior through the sourrounding ecosystems, by using the natural yeast (since 2010-2011) and only small amounts of interventions such as some sulfer and the end of the process if needed. Barbera is a small producer making Ca 65-72000 bottles a year and as they make 11 diffrent wines – well you do the math & am lucky if you score a few 🙂

When you visit a new area you can get to learn to know it not just by your eyes, ears and nose but also through flavors. One way of implementing the terrior of an area is to eat and drink its local food and wine.

Today you can often find international grapes grown almost anywhere, but given the choice I choose wine made by local grapes. Right here and now that grape was perricone, an Italian grape grown in Sicily. It was once one of the more common grapes for red wine in this part of Siciliy but today only a few wine growers have it. In total ca 300 ha out of Sicilys ca 112000 ha of vine yards. 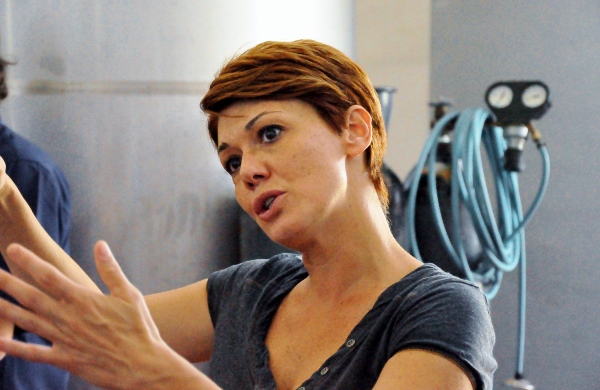 Perricone is an interesting grape, not an easy grape, neither to grow or love, but still a grape that grows on you and it is a grape I would love to explore more.

The wines has aromas of red ripe fruit , a little eartiness, and lots of spice. There is a diffrence especially between the 2010 and the 2011 & 2012. The 2010 is a bit harsch and lacks a bit in the middle – the fruit is a bit light – buthas a nice finsh. The 2011 and 2012 has a rustic touch, still harch but with fresh fruit and really nice “salty minerality”, They are balanced, though the 2012 still is very young, has some green notes (steams) and good tannins and bite of pepper in the finish. It’s a bit chewy but fresh and has a long and intense aftertaste. Would love this with steak, meat dishes, pasta but definitely  a litte aging.

The trip was part of a sponsored blogger tour of the Western Sicily by by Regione Siciliana – Istituto Regionale Vini e Oli, in collaboration with Fermenti Digitali / Proposta.